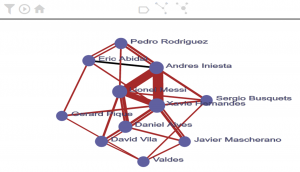 However, exploring it in the last 2 years, we’ve discovered that using Force Layout as the main visual link analysis control in complex web applications for big data analysis, as the ones we develop at webiks, requires quite an effort. Especially when trying to use it for real world data-sets, describing human social behavior (SNA, Social Network Analysis).

So we’ve developed “force-horse”, a javascript component that wraps Force Layout and adds some functionalities that we found that are very useful, specifically:

A force-horse element does not have an intrinsic size. It adapts itself to the size that is set from outside, in the surrounding HTML. force-horse is implementing CSS flex-box display logic.

Parameters are passed through the options attribute. Pass an object, which has to contain the property:

Force-horse writes into the options parameter the property:

forceHorseInstance: an object representing one directive instance (note that several instances of force-horse may be displayed simultaneously, and independently)

This instance property can be used by the application to register callbacks and/or to call callback apis of the directive. There are four available types of callbacks:

On activation, force-horse shows the given graph. The graph stabilizes after a short force simulation. Then, if needed, it zooms out, so that the whole graph can be seen at a glance.

Beside showing the graph itself, force-horse provides visual indication of hovering over a node/link, and of selecting a node/link. It supports node dragging, and also pan and zoom.

In addition, force-horse is providing the following buttons:

The main dependencies of force-horse are:

A complete list can be found in file bower.json at the project’s root.

Force-horse was designed for high performance. Some of the measures in use are:

The ability to compute multiple, parallel link between two nodes is not currently supported intrinsically by d3.js. It was also not yet developed by the users community. Therefore, we developed this ability especially for force-horse. For the mathematical and implementation details, see here.

What’s next? We are thinking in the following directions:

Thinking about the same topic from a different perspective? Share your thoughts here in the comments!

Working on something similar? Contribute to our github project!